Word clockie is a (yet another) word clock made as a first aniversary gift to my wonderful wife, Ann-Marie. It is a spiritual successor to Clockie, a count-down clock I made when we were living far appart when we had just started going out. Instead of counting down to our next meeting, Word Clockie counts up the time since we got married. 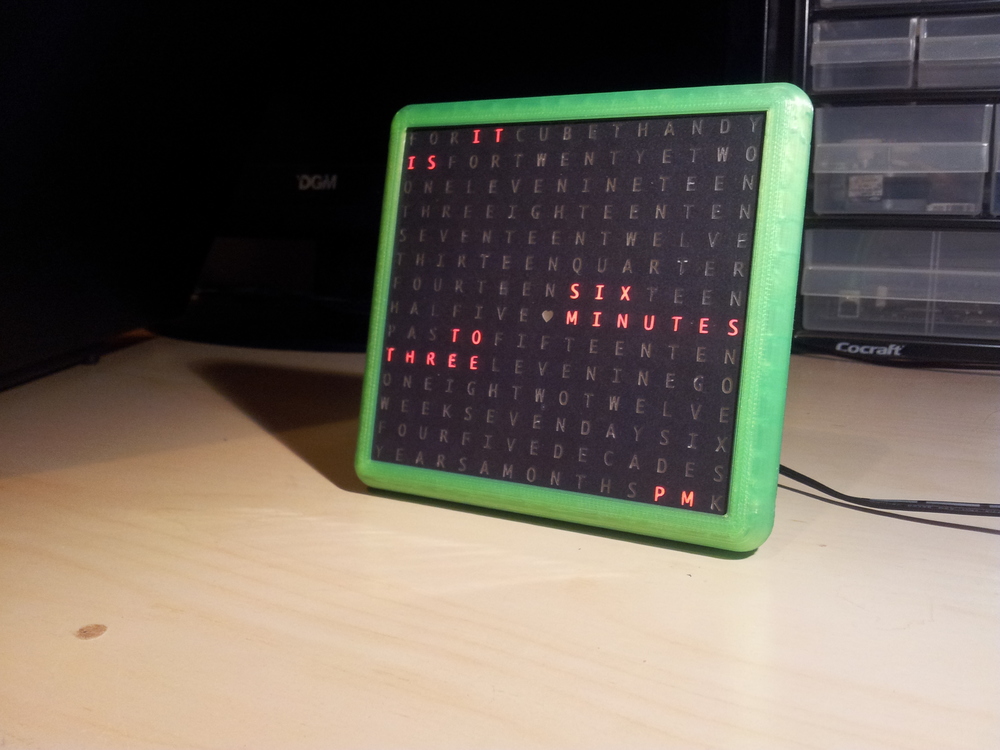 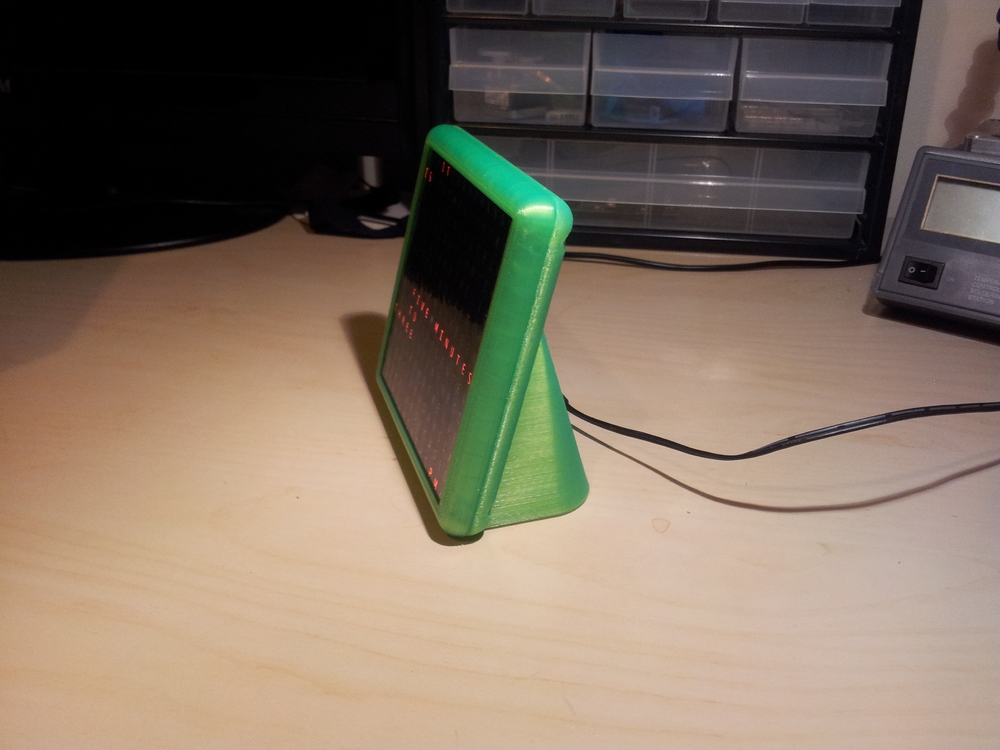 With the soppy bit out of the way, Word Clockie consists of a matrix of letters selectively illuminated up to spell out the current time. Following the surprisingly recent revelation that that easily sourced LED matrices solve the traditionally hard problem of building large LED arrays with nicely defused light without leaking between LEDs, our anniversary seemed like a good excuse to build one. Word clocks have of course been done to death but in spite of this Word Clockie hopefully has a handful of fun twists not shared by other offerings. 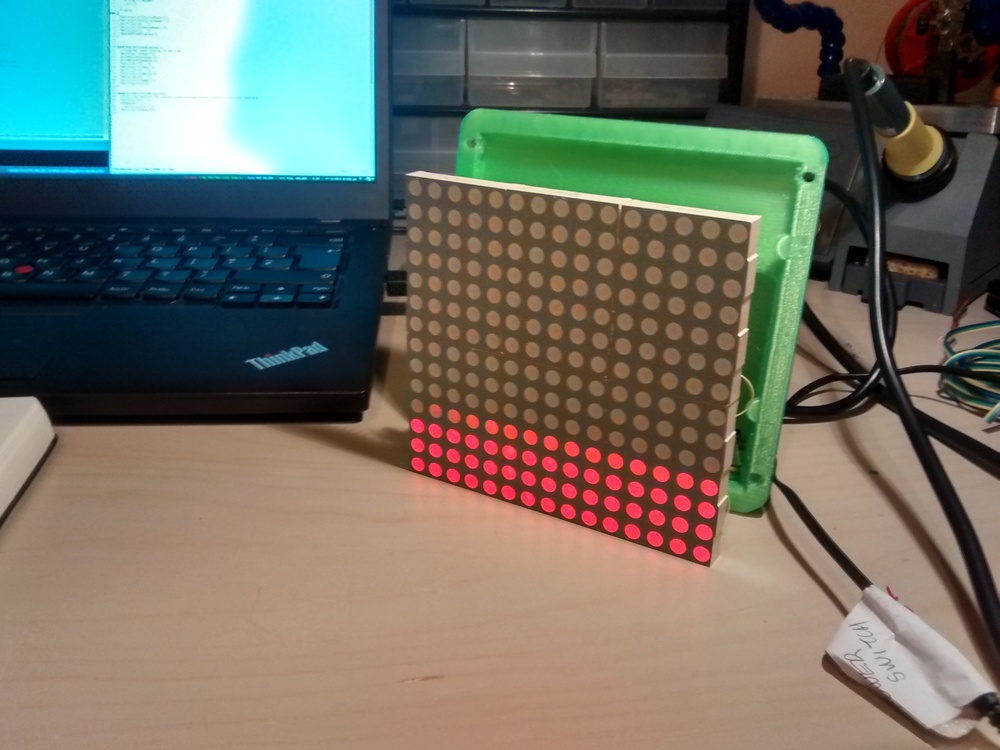 The clock has a desktop form-factor and lives in a completely 3D printed enclosure (by far the largest and most complex object I've designed and printed). The character matrix is able to tell the time in one-minute-increments and the duration of our marriage to the day for up to 190 years. It is powered by a 12 V wall-wort but unlike Clockie it contains a battery-backed realtime clock to keep time. This means Word Clockie keeps fairly accurate time and also survives being unplugged. Also inside is a pair of tilt-switches which are used to detect when the device is gently shaken to trigger a friendly message or animation. Finally, as with Clockie there are no buttons or switches to set the time and so an optical system is used to set the time if required. 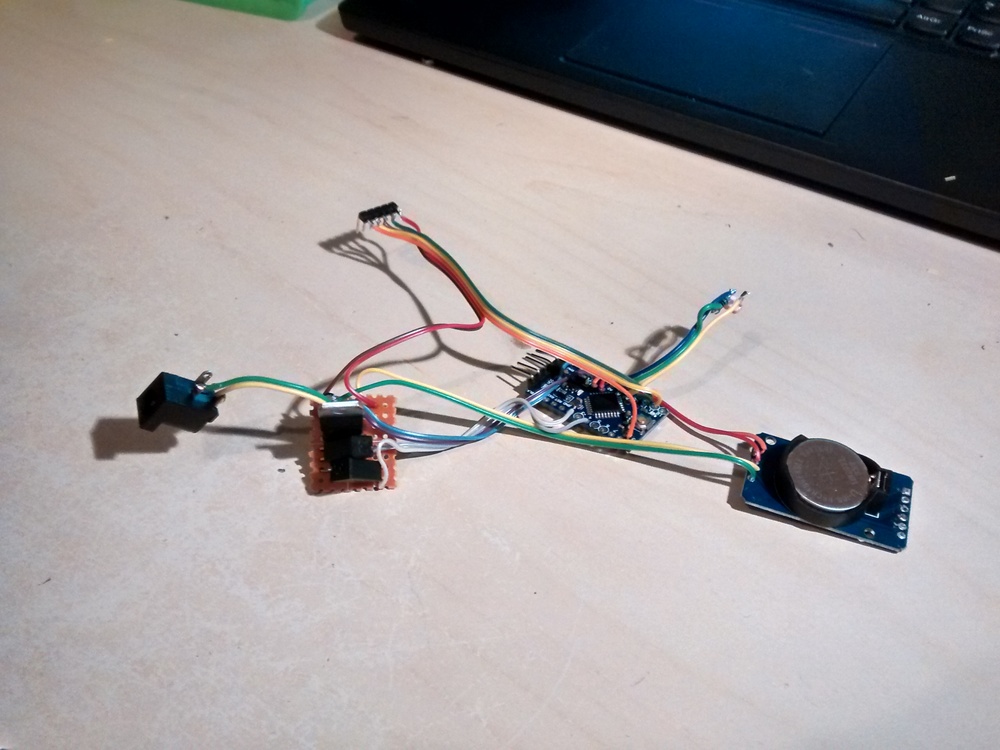 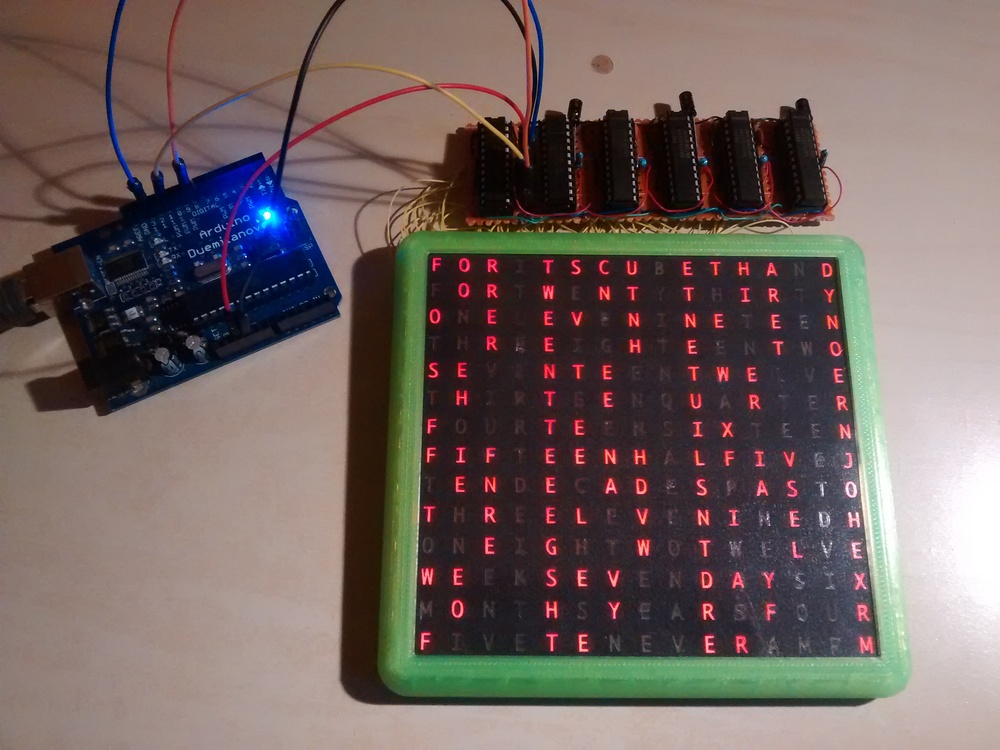 The matrix of letters is the result of many hours spent attempting to mechanically generate efficient matrices for a given set of desired messages. Multiple steps in this process turned out to be NP-hard (and worse) and after achieveing uninspiring results with various search-based heuristics (such as genetic algorithms), I started working on simple greedy algorithms to generate the word matrices. These proved inadequate to reach very high-levels of compactness and a great deal of hand-tweaking was used to produce the word matrix in Word Clockie. Examples of strings which can be produced using this matrix include:

The letter matrix was cut out of sticky-backed paper printed black using a desktop plotter. Each letter was then painstakingly peeled off. The letter 'E' strangely proved the most troublesome as it failed to cut completely in the majority of cases requiring removal using a scalpel. 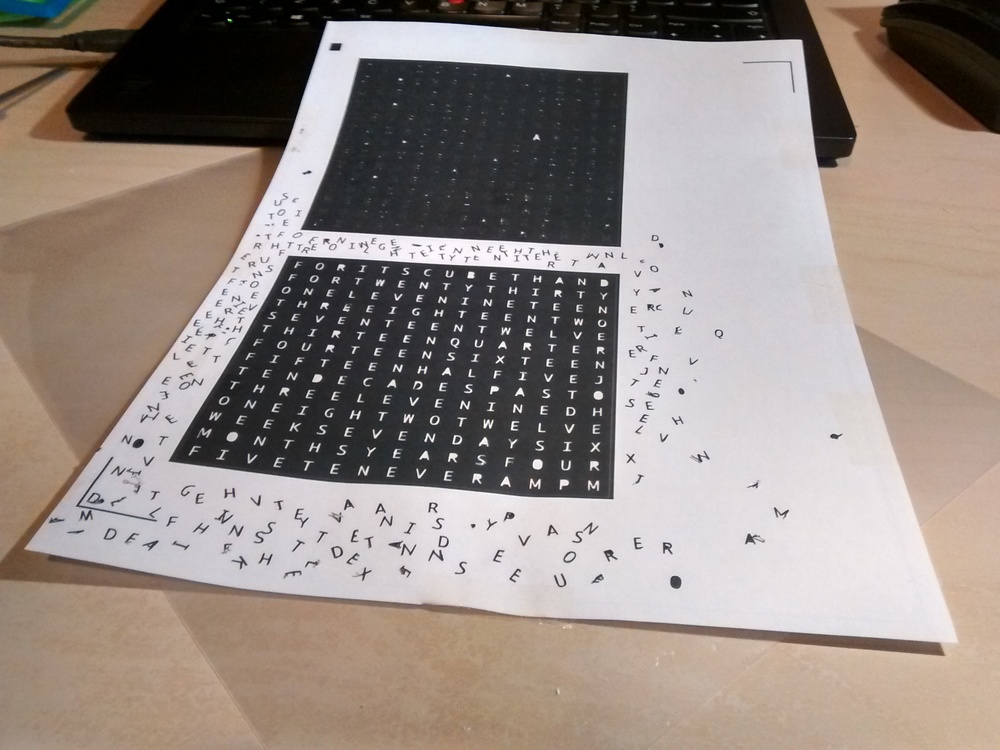 With the letters removed, the mask was then transferred to a laminating pouch. Letters such as 'O' and 'A' then had to have their central shape stuck down in the gaps. 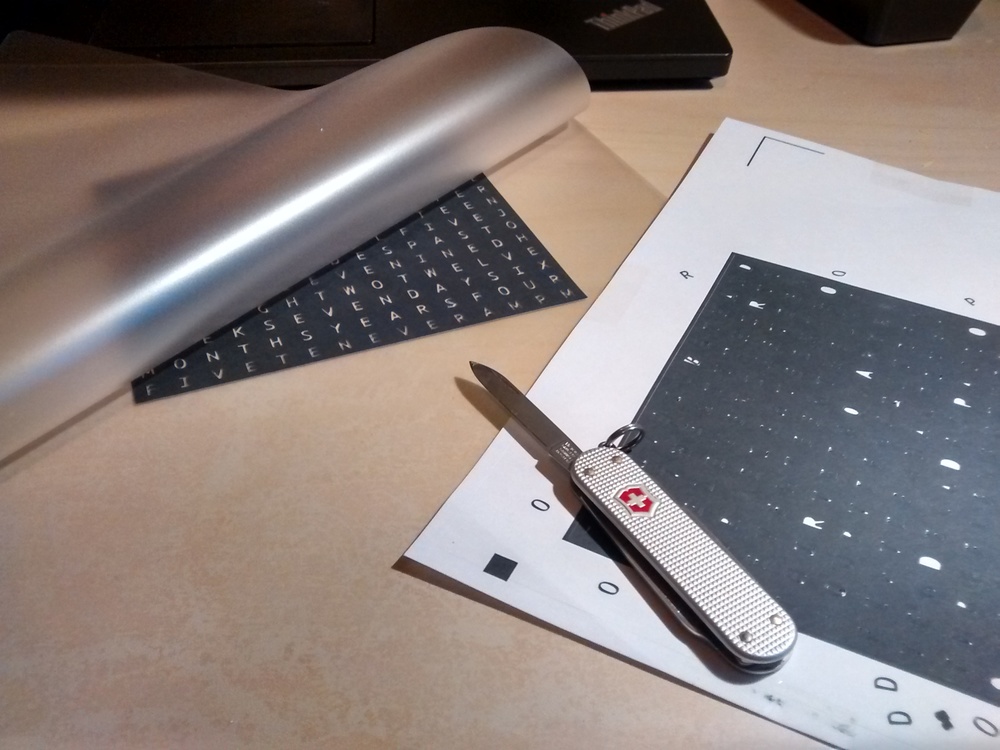 The pouch was then run through the laminator yielding a fairly sturdy mask with a pleasant finish. 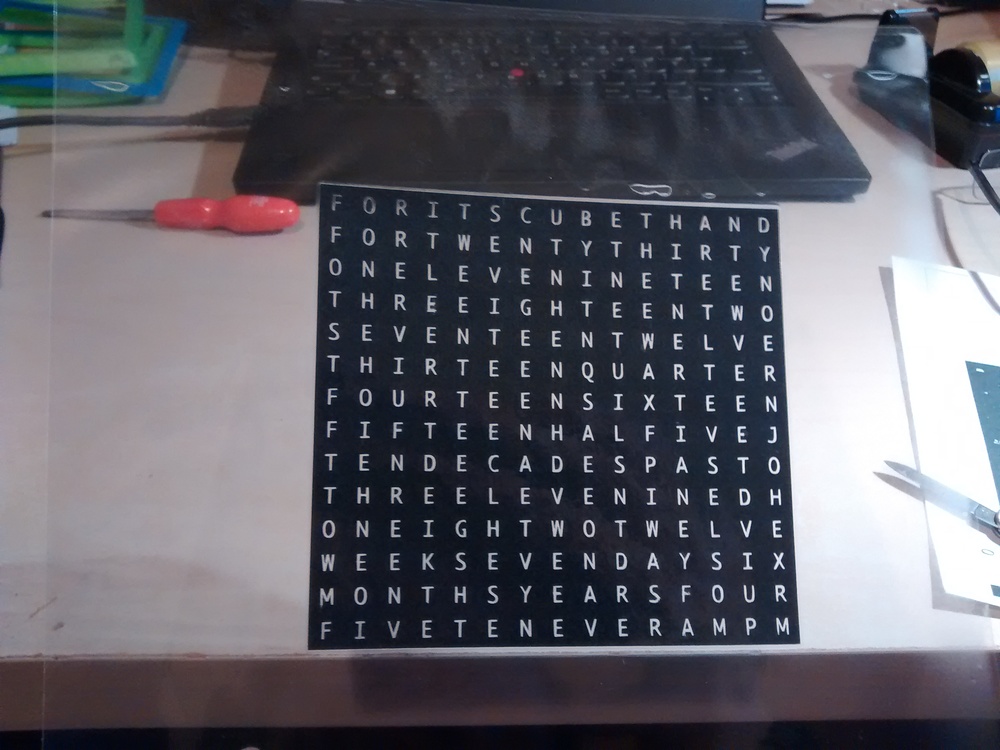 The software is a relatively pedestrian affair running on an Arduino Pro MIni with a handful of flourishes. In addition to displaying messages using the letter mask, the display can also operate as a low-resolution bitmap display. This is used to display either simple graphics (such as an animated face) or scrolling text with 'real' fonts and proper keming. 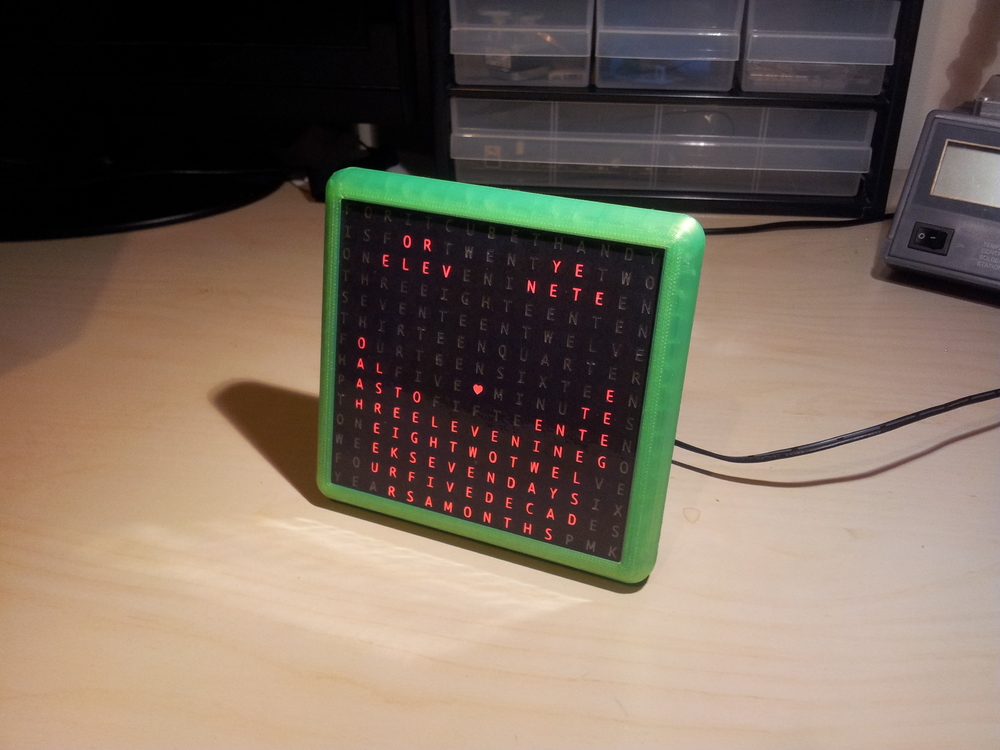 The software operates on a pair of frame buffers where one is considered the "current" image and the other is used to build up the next image. When a new image is ready to display, the buffers are "flipped" to display the new image. This "flipping" process may be controlled by one of a number of simple (fading) animations. These animations are implemented by either controlling the display's duty-cycle (when fading to/from black) or rapidly switching between the two frame buffers to implement a cross-fade (i.e. somewhat like software driven PWM).